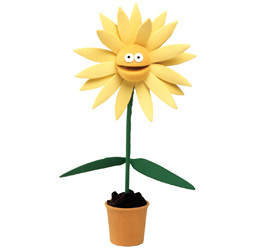 TV land flickers alive at the touch of a button, its audience of executives, schoolchildren, and housewives still struggling to blink away the night’s dust from their eyes.

Beyond the screen, people are already suited and booted, announcing the next effects of the credit crunch and trying to reassure a viewer who has called in for counselling on her third mortgage.

Prompted by the light-hearted jingle which ushers in the ad break,  millions of viewers simultaneously reach for the kettle, while an animated potted flower poised in an armchair explains in jovial terms how concerned it is about offering a great banking experience.

Focused on promoting a new range of home loan products, the BankWest “Happy banking” campaign was launched in February of this year, long before the world got knocked off its axis by the market crisis.

According to Tim Addington, editor of B&T, Australia’s highest circulating Advertising, Marketing and Media Magazine, the bank is more than satisfied with the results the campaign designed by ad agency Host has managed to churn out so far.

Air doodling onto a freshly printed copy of his magazine, the thirty-something Briton muses: “I’ve noticed ever since this crisis, over the last couple of weeks, that there are ads coming in about, you know, ‘Your money’s safe’, ‘Don’t worry about it, we’re not going to go bust’, ‘Interest rates are coming down’, and obviously, they are trying to drum up more business.”

Opinions diverge on exactly how the current situation will affect the advertising industry in Australia.

Companies like Woolworths and Coles continue to thrive, with both brand building and tactical campaigns in the works while certain other heavyweights have started pulling out of the competition.

Gawen Rudder, Manager of Business Services and Advice at the Advertising Federation of Australia, reckons it is a time of negative self-fulfilling prophecies, but that Australia’s relative isolation as well as its optimism could save the face of many an advertiser, even if human ‘needs’ are most likely to preside over the luxury ‘wants’.

“Big clients like Harvey Norman announced a couple of weeks ago that they were going to drop their advertising spend by twenty per cent, which is a big drop,” says Andrea Sophocleous, editor of AdNews, Australia’s top selling Advertising, Marketing and Media magazine.

“A lot of the advertisers, in times like these, will do what we call tactical advertising which is basically sales, ‘Buy one get one free’, ‘We’re selling everything cheap’, instead of brand building with the big glossy ‘This is our brand’ where they don’t really promote a product”, says Mr Addington.

This may also mean resorting to nostalgia, and vetoing ideas considered too adventurous on the creative front.

The industry is in constant mutation, with the mushrooming of agencies on one hand, consolidation on the other, and the widespread rift between ad and media agencies, which is criticised for generating extra costs in data collection and slowing down the creative process, among other things.

“The market is only so big in that advertisers at the moment are either cutting their advertising spend or redirecting where they’re spending their money- from television to online for example- because of all the financial uncertainty at the moment and also because they are not selling as many products as they were six months ago,” says the AdNews editor flipping through expenditure figures recently released by the Commercial Economic Advisory Service of Australia.

Even without the ambition of onerous mass media publicising, making an ad which will effectively reach its target audience comes at a cost.

“Now, you’re a kid, a tween, there was something else called a ‘kipper’ which is someone in between 16 and 20, then you’ve got the Gen Y’s, and then the Gen Z’s are coming in and basically everyone’s fragmenting”, says Mr Addington, recalling a talk given during a Commercial Radio Australia conference he attended.

“You might be watching a TV show and have your computer on at the same time and check your email or reading something online and you might get a text message as well:  your attention is totally divided between three different mediums so that achieving ‘cut through’- that’s what advertisers say- in a ‘cluttered environment’ is definitely an issue for them,” explains Ms Sophocleous.

Having the reputation for being as trustworthy as used car salesmen does not help either.

In bold red letters against a yellow backdrop, perched atop a grimy concrete building, its message hovers with an air of unfinished business, targeting everyone and no one at the same time. The word ‘sex’ has been stamped out, the outlawed billboard tagline now reading: “Want longer lasting CENSORED?”.

“The Advertising Standards Board [ASB], which is the body that oversees ethics in advertising, has been trying to act on this for a long time but have been unable to. Now the people of Advanced Medical Institute [AMI] have sort of said ‘yes, we’re going to do what you ask’, but they’ve done it in such a way that they’ve created even more publicity by partly covering it. They’re trying to be smart arses,” says Mr. Rudder.

He regrets that certain campaigns, like AMI’s for penile dysfunction treatment, give advertising a bad name.

“At the moment, in particular, there seems to be a lot more emphasis on clamping down on advertisers and making sure that within certain areas that they are behaving properly”, says Mr Addington.

A proposed ban on junk food advertising on television before 9pm to slow down the childhood obesity epidemic, and the possible generalisation of the Victorian Voluntary Media Code of Conduct on Body Image, which would result in the addition of disclaimers on digitally enhanced images of bodies in advertising, reflect the desire of individuals and lobbies to raise awareness on the effects of consumer trends, even if the results have not always been in their favour.

Moreover, the Australian Competition and Consumer Commission and the Australian Association of National Advertisers are seeking to holding companies accountable for “green washing campaigns” and make sure that all environmentally friendly claims are truly founded.

And then sometimes, the citizen consumer becomes the citizen advertiser, without even knowing it.

“You’re not the same person I fell in love with”. Heavy drops of rain splatter against the glass pane of a metropolitan sky-rise. She seems numb, lost in her high power existence.

Baz Luhrmann, Australian film director, screen writer and producer, renowned for his Red Curtain Trilogy -Strictly Ballroom, Romeo + Juliet and Moulin Rouge!-has landed one of the most coveted accounts in the industry, the prestigious, $ 40 million Tourism Australia campaign, part of the $193.3 million promised by the Rudd government to encourage more international tourists to visit Australia and strengthen domestic tourism, according to the Australian Bureau of Statistics.

“It’s quite different from what’s been done before because it’s actually focusing on the individual, so it’s not really saying ‘Australia’s got these great sights’”, says Mr Addington about the recently released ads in which stressed out executives find solace and themselves in the Australian outback thanks to the gift of soothing words and a fistful of Aussie earth from a small Aboriginal boy.

“There’s PR value in using Baz Luhrmann because he’s so well known: a lot of magazines and TV shows are probably going to pick up on it. It’s worth a lot of money and it’s free because everyone’s writing about it”, says Ms Sophocleous who finds the ads a bit too stylised.

“To be honest, I think the Baz Luhrmann [feature] film ‘Australia’ is going to do more for Tourism Australia than any advertising campaign ever would. I just think once that film comes out people are going to flood to Australia”, she adds.

Gawen Rudder was at advertising agency Mojo when it created the 1980s campaign featuring Paul Hogan for Tourism Australia.

“That campaign was aimed principally at Americans and it hooked into a trend we hadn’t actually identified. To be perfectly honest, we didn’t know it was going to be as successful as it was.”

“It presented an ocker image, a sort of very back-of-beyond image, with crocodiles and knives and hats and so on, which didn’t actually reflect Australia in real terms but reflected Australia in imaginary terms to the Americans who probably acquainted it with the Wild West and cowboys, and Paul Hogan became an Australian cowboy.”

According to Mr Rudder, it was the first time the Australian accent was really heard on television. He has his doubts on whether the tagline from the new campaign “Come Walkabout”, a reference to Aboriginal culture, will be properly understood by the target market.

The campaign has lost no time in sparking great controversy, but Ms Sophocleous says that the creative director of DDB, the agency which won the pitch, has found the feedback from the United States and other markets really encouraging with consumer enquiries to Tourism Australia global offices already up.

So, gone are the days when Mr Crocodile Dundee offered to slip an extra shrimp on the barbie…

“I think we’ve become more global in what we do and you could argue that that’s a good thing or a bad thing”, says Mr Rudder. “I still think there’s a particular Australian sense of humour and an ability to poke fun at ourselves”, he adds, gently tugging at the leather strands of a crimson cushion.

Time will tell whether the sprinkling of magical dust goes down a treat, or leaves Australians wondering ‘where the bloody hell’ their taxes went.