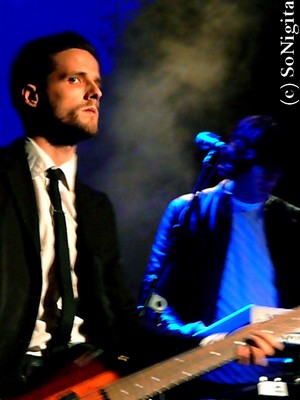 Time, in the shuffle repeat world of music, can  go by extremely slowly. We still be stuck listening to the Beatles, traditional folk songs and Beethoven.

Time, in the molto allegro world of music, can go by extremely fast. Wow, was MGMT’s big break 2 years ago already? I’ve heard Time to Pretend in so many film scores, it seems like the two kids have been around forever. And did you know they were Genesis fans? (click on the link, it’s not a Wikipedia page)

Basically, I can’t seem to remember what I was listening to in 2005-2006. So I cheat. Ah yes, The Killers’ Hot Fuss, My Chemical Romance’s Three Cheers for Sweet Revenge, Weezer’s Make Believe. OK.

These were the musical circumstances in which I discovered The Bravery, or rather stumbled across their phoenix album  at my local library.

I’m not quite sure how many times I listened to that album. I was pretty happy when they came up with a new batch of songs a couple of years later. Not being much of a groupie, I frankly couldn’t have recognised them off a poster if I hadn’t seen them play live at the Metro, Sydney in June ’08 -which I left with an embarassingly huge crush on then emaciated and scowling bass player Mike Hindert.

Today, I learnt that they’re coming back, and have already begun spreading new tunes.

Here’s a first clip, directed by the band’s very own bassist extraordinaire.

A definite snuff-movie, stop-animation, silent-era vibe to it, don’t you think?