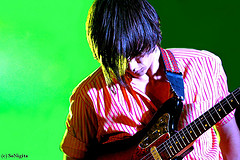 Or, « Do I need to update my ears to listen to your virtual song? »

I have many CDs. I’m looking at them right now. They’re stacked on my desk in groups of about 15.

I tried sorting them according to colour, but realised I’d never find anything that way, and gave in to a highly unoriginal, but tried and tested  method. « The old alphabetical ploy », as Inspector Clouseau would say.

When I acquired an mp3 player about four years ago, I grudgingly and painstakingly transferred a great number of songs to the computer, and that’s when I realised a new era was beginning.

A new disjointed chapter in the history of the music industry: In the not-so-distant past, songs were often available in single format, but not always. Now, all of a sudden, songs are units lost in space and time. No need to pin them to an album, no need to release them in a particularly organised fashion, no need to ever publish them on a  physical object.

There are good aspects to this:

-digital distribution and airplay as they are now massively practiced are fantastic- and relatively cost-efficient- means for beginners to be heard;

-thanks to an ever-growing online social networking community,  bands learn to control their image, communicate with their public, and get instant feedback;

-also, you no longer have to pay for the 6 songs you don’t like on a 12-track album.

However, functioning on a solely virtual basis has its limitations. Here’s what a fellow blogger had to say about the predicted death of the physical music market.

As someone who always goes for the CD, rather than the download, I feel increasingly alienated by bands who are absent from the physical market. Furthermore, now this is only a hypothesis not actually being a musician, I believe that:

-virtual distribution, from a creative point of view, is letting quite a few musicians get stuck in a rut, because if there is no physical object, an entity in need of creation, at the end to look forward to, when do they turn the page and start something new?

Finally, a quick word about the tracks which inevitably fail to meet our approval on albums: I’ve noticed that when you go back, sometime later, with a fresh set of ears, those B-sides can become your all-time favourite tunes. It’s the ‘When Harry Met Sally’ magic of music. Then again, if you hand-picked one song out of the virtual galaxy,  and therefore chose to mercilessly let sleeping notes die in the black hole of the cybersphere, don’t be surprised if you miss out on the delightful feeling of rekindling an old and underestimated friendship.